The Sussex League is sponsored by Rotor. 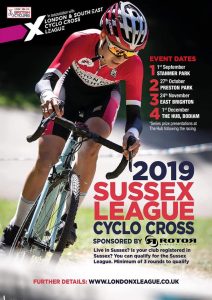 2019/20 Results can be found ; https://www.londonxleagueresults.co.uk/sussexleague/

The Sussex League has been around for over 30 years and traditionally the Senior mens winner was presented with the Sussex League trophy at the end of the season. In the early years it was far simpler to manage due to the relatively small number of riders racing. As the league has expanded and Cyclo Cross has become more popular it became more difficult for Sussex league coordinator, Andy Seltzer to manage manually as as sub category of the main London and South East Cyclo Cross League. He managed this basically by knowing the riders (or clubs) and completed a manual spreadsheet, but there are just too many riders now to make it a viable option. We thank Andy for all his hard work over the years and in helping us set up the new system.

So, what is the Sussex League today?

The Sussex League is a sub-category series for riders are based in Sussex, that runs alongside the main London and South East Cyclo Cross League. You don’t have to do anything differently to the normal sign on process – simply sign up to the races, turn up and race. Rotor are supporting the Sussex League and will be providing overall prizes for each category podium which will take place at the final round. This year there are 4 races and your best three out of the four races to count towards the overall titles.

The qualifying races are;

Overall titles and top 3 for both Male and female riders in the following categories. Rotor will be providing some fantastic prizes and look out for some great custom made trophies.

To be eligible you either have to live in Sussex or your club/team registered in Sussex. Results and sign on guru, Chris Clague, will create results as the season progresses. Make sure you’re at the final race at The Hub at Bodium where prizes from Rotor and The Sussex League Trophy itself will be awarded.

The Sussex League trophy is the oldest trophy we have in our Region. The Sussex league for many years had presented to the Senior mens winner the 14 inch Silver plated Sussex League Cup. This cup had seen better days and was in a very poor state and had found its way to the deepest darkest corner of the shed. This cup has history dating back to the early 1990’s and as part of this revamp of the League the LCCA committee felt it important to preserve this trophy and commissioned repairs. The trophy looks fantastic and will look great in anyone’s trophy cabinet. We will  present this Trophy to one of the overall winners from all the categories above. A team will be selected to set criteria and select the champion of champions. We are going to renovate this trophy and keep the history alive.

We also wanted to create a distinct identity for the Sussex League so this year there will be a separate Sussex League prize presentation hosted after round 4 at The Hub at Bodiam Castle on 1 st December 2019.. This is a fantastic venue to host a race and the Hub cafe look forward to welcoming you into the cycling friendly cafe.

Is there a enter all series option. No

I wish to ride only 1 event; will I have to pay the £10 Number Charge in addition to the race entry fee ? Yes, even if you ride 1 event you will be required to  pay the £10 race number charge.

I wish to only ride the Sussex League events; will I still require the number Charge? Yes

Can I enter on the day? Yes, however entry fees are a little higher and process in sign on is a little slower. You will also not be gridded at the start. We strongly advise online entry.