Frylands Scout Camp has a now traditional place in the LDN and SE League Calendar as well as a very unique atmosphere. The lungbusting course and often testing conditions reward mountain bike skills and is a great place for a roadie to learn the fine balancing act that is needed on fast paced, loose downhills. What comes down must also climb up and here the road riders take back their advantage, albeit with off-road skills needing to be spot on to control slipping rear wheels. 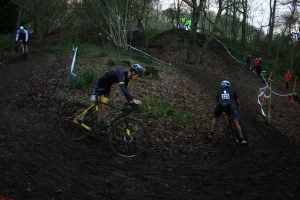 For the under 10s/12s the course at Frylands is really tough and a bit of a wake-up from some of the field courses of previous rounds. Starting on the gravel, the course turns back and forth through the woods and offers options that include the obvious cleared course weaving through the trees, or for the more observant (and braver) there is a more technical line which presents overtake opportunities.

For the recce lap, u12 riders Oscar Amey (Team Darenth) and Peter Carpenter (Sutton Cycling Club / C&N Cycles) lead the way at a slow pace, with Tim Sales (British Cycling) bringing up the rear and providing the advice and tips.

Race gridding was efficiently completed with a good showing of 23 riders on a fairly miserable day – the race getting promptly underway. Immediately at the front of the race Joe Carpenter (Sutton Cycling Club / C&N Cycles) led out Noah Smith (Team Darenth) into the first corner and climb. Behind them Ivo Thwaites (Kent Velo Kids), Woody Clayton (Rotor Race Team) and Oliver Goodman (Rotor Race Team) duked it out for third.

For the girls, the eventual podium immediately took shape, with Betsy Hacker (Kent Velo Kids) ahead and steadily stretching a lead over Charlie Anastasia Furlong (Limited Edition) who did the same to Nico Stewart (Herne Hill Youth Cycling). 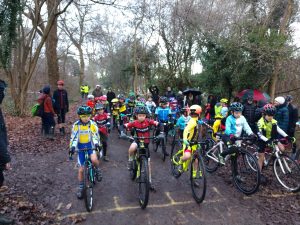 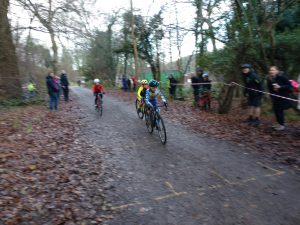 Back up front, the lead was swapping on every section. Joe, ever determined, was not going to let Noah get away on a course that really played to his strengths with the technical sections. As they came around the final lap they sprant (yes – that is a word according to my sons) down the rooty section, Joe making a good gap – when they re-appeared Joe was still in the lead but Noah was closing. Eventually Joe held Noah off to take his first win of the season. Both put in their fastest laps of the race on this final tour, matching each other’s time to the second.

Behind them, Woody, Ivo, and Oliver had continued their own battle, with Ivo coming through in front of Woody and then Oliver. A very tough course for the u10s, which as has become the norm lead to a few tearful retirements and a lot of very exhausted finishers. Spectators were amazing, with the cheers for Joe and Noah resonating around the woods – possibly the most exciting race of the season so far, although I may be biased 🙂

Slightly further back, once again the girls podium was already set – Tulsi up front and fighting for third overall, whilst Zoe Roche (Sutton Cycling Club / C&N Cycles) took up second spot for the girls followed by Edith Davies (Club Cyclopark) just behind but unable to apply the pressure. 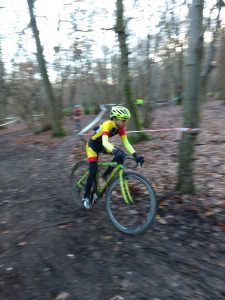 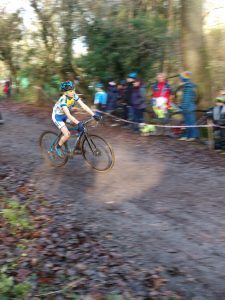 Up front Peter and Oscar were swapping places and with backmarkers coming into play progress through the traffic becomes key. On lap 4 a decisive and unusual mistake by Oscar allowed Pete to catch and pass, building significant lead by lap 7 and the eventual win.

Third place overall had been sorted on lap 4 by Tulsi, where consistent lap times saw a gap begin to emerge to Theo who would come home fourth and third placed boy. A brilliantly tough course that had become trickier as the riders circulated and cut up the ground. Fantastic support from the sidelines all the way round which has a visible effect as riders react to the encouragement.

A familiar grid formed with most of the usual suspects avoiding the Ipswich Trophy clash and as the gun went it was a visibly faster state than we’d seen in the Youth races. Jack Lear of Southborough took the initial lead before his bike clogged heavily leaving Kirshan Bakrania, Irfan Zamen and Matt Williams to duke it out. 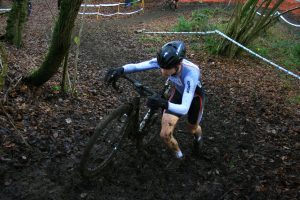 Bakrania and Zamen changed position several times but it was Williams that was in control as he rode to his first win of the season, showing the same kind of form that grabbed him a podium at Leeds Castle – he clearly likes the mud!

In the Vet 40’s there were a few of the riders missing and James Waddington took the early lead to capitalize on that – Philip Deacon (Epsom), Russell Short (Chaingang), Dylan Bexley (Dulwich), Antony Buchan (unattached) were also in the mix from the very beginning and it was Deacon that was making the biggest inroads into Waddington’s lead, getting with 5 or six seconds of him at about ¾ distance. 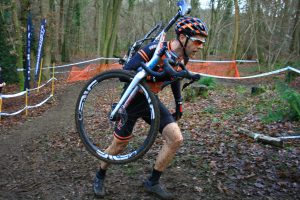 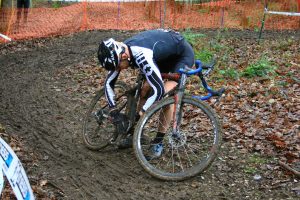 With the pressure on James was starting to get chain jamming issues with so much thick mud getting in behind his chainring and derailing the chain in the bumpy sections and it looked like Deacon may make his move with one lap to go. Then disaster struck for the lead two – Chain issues forced Waddington back to 2nd place and a puncture sent Deacon back to 7th! The man who came out of third place to take a great win was Daniel Baines of C&N Cycles. 3rd place was taken by Antony Buchan (unattached).

The women’s field was once again dominated by Caroline Reuter of London Phoenix who stamped her authority on the race from the first lap to take a strong win in the Overall and the V40’s by 45 seconds back to Maryka Sennema and then a massive seven minutes to the next rider! Kate Dixon took the 3rd place and with it a great win in the V50 race. 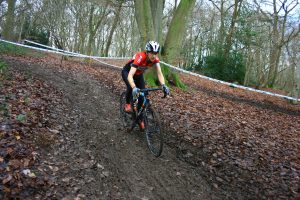 Next up Olivia Campbell (Scarpa) took the Senior win, 1 lap ahead of Sherilyn Powell and then Pip Jenkins (Southborough) in third position. Alice Davies won the Junior race after collecting the Challenge Tyres Rider of the Day prize from the last race at East Brighton. 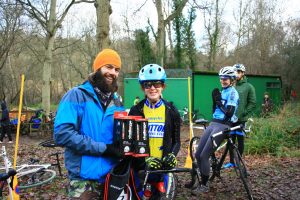 Most  of the usual riders were here for the Vet 50 race and some had raced the day before at Ipswich so the front rows looked very similar to normal. Jon Lyons (Invicta) and Jez Parsons (VC Jubilee) took up the race for first and second with Jon eventually tiring in the think gloopy drying mud to take 2nd place. George Higgs looked strong and in control of third place which he maintained throughout the race. Nick Welsh (Crawley) made a brilliant progression after finding himself in 14th position after lap one, leapfrogging ten riders to finish fourth. Ade Lyons rounded out the top five with another great race, but Parsons once again proved he was the boss to take the win to extend his lead in the overall. 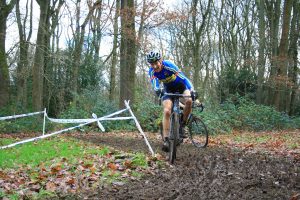 By 2pm the course wasn’t dry by any stretch but it had definitely got faster and a decent racing line had formed with proper ruts – this rewarded accuracy and good tyre pressure choices. Chris Ansell (Corridori) was plagued by rear tyre issues and I think he ended up using a third spare by the end, nonetheless it didn’t slow him down and he took a strong second place. Steve Kane (ASL) rode a brilliant race, initially behind Harry Franklin who took a nasty looking fall just before the main spectator area. Kane kept the pressure on to finish 3rd on the podium. 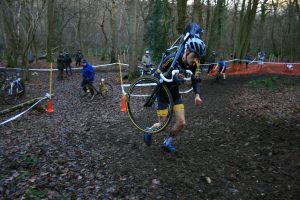 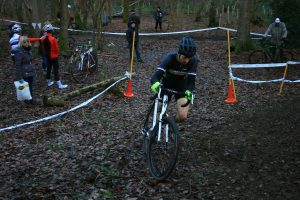 Behind them Cameron Preece (Southborough) clocked his best result in his first year of the Senior category to claim 4th place proving that one of the big skills at Frylands is to look after your bike, especially if you’ve only got one. A swathe or rear mech issues and punctures behind him saw rider after rider drop out of contention. The other racer who was doing a fine job of riding cleanly and finding the right lines was Wilf Sinclar – the Pearsons rider steered clear of problems and used his years of LDN and SE League experience to take a brilliant second win of the season and the advantage in the overall.

Under 10/12 races written by Andy Carpenter.

Don’t forget to send your suggestions in for the Challenge Rider of the Week to stuart.mcghee@evanscycles.com to win a pair of tyres. And if you take any photos please share them with the hashtag #londonxleague on Instagram or Facebook to be in the running for the cyclephotos.co.uk amateur Photo of the Week which will win Balint’s latest album!

Pre-entries speed everything up, save you money and are open until 6pm on the Friday before each round so please enter here;